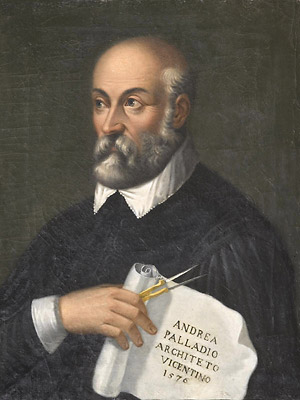 Palladio's biography would be worth a novel or a costume film: his humble Paduan descent, the difficult beginnings in the sculpture laboratories, the encounter with the patron who introduced him to classical culture...
It is not, of course, a cloak-and-dagger-story, but the tale of an extraordinary artistic career with the background of R enaissance Italy.

Every villa and every palazzo, as well as the great Venetian churches, have their own history and a key person that testifies a moment of the architect's personal history. It would be nice to see his works in chronological order, as we can do virtually on books and on the computer. We would be amazed of how accurately they reflect the aspects of his sojourn in Rome, for instance, or of the personality of his clients.

Palladio lived in a time of great economic growth: it was the years when Venice was suffering a crisis in sea matters and was looking with renewed interest at the dominions on the mainland. He was the right man at the right place: the big Venetian families were asking for country dwellings worth their high social standings, and the families of Vicenza claimed palazzi that should soothe the inferiority complex of provincial inhabitants.
Palladio's career reached its peak in Venice and it was not by chance that he turned to religious architecture.

The last act of his career took place in Vicenza and it is almost unbelievable that its object was the most meaningful piece of architecture, the Teatro Olimpico, as if to say, "The show goes on."