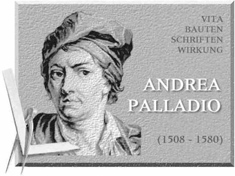 1508
Andrea is born in Padua on 30th November, son of miller Pietro della Gondola (his surname refers to the traditional Venetian boat and to the waterways along which the mills stand).

1521
At the age of 13 Andrea is employed in the Padua sculpture laboratory owned by the stonecutter Cavazza, but the hard working conditions lead him to search for better luck.

1524
Andrea moves to Vicenza and works in the laboratory of Girolamo Pittoni and Giovanni da Porlezza, the so-called Pedemuro masters, who get the name from the town quarter where their shop stands. The young man performs those repetitive jobs which the owners usually leave to the apprentices – capitals, reliefs and trabeations, but over the years, he becomes always more independent in dealing with the architectural aspects of the orders.

1534
At 26 Andrea marries Allegradonna, daughter of the carpenter Marcantonio, who will give birth to 5 children: four sons, Leonida, Marcantonio, Orazio and Silla, and a daughter, Zenobia.

1538 c.
At about 30 his encounter with Giangiorgio Trissino takes place, the famous scholar and humanist, who understands Andrea's genius, takes a liking on him and leads him to study classical architecture; he christend the young Andrea "Palladio", which is a reference to the Greek goddess of wisdom, Pallas Athena.

1538-1543
During these five years the young Palladio, accompanied by his patron, undertakes various study trips, first around the Veneto, then to Rome and its surroundings (other trips follow until 1554). Among the monuments that impress him most is the Pantheon, with its huge hemispheric dome, which will become a characteristic feature of Palladian villas.

1542
Around his 35 years Palladio gets the first relevant job: the renovation of the palazzo of the Thiene family, which, according to the project, should take up a whole block in a very central position, along the high street of the town. Some difficulties during the work in progress hinder the execution of the front facing the town quarter San Gaetano. Later the same year, he designs the Villa Pisano in Bagnolo di Lonigo, which is a turning point in his architectural conception.

1546
At the age of 38 the public commission officially appoints Palladio architect of the city of Vicenza. His job is the renovation of the loggias of the old Palazzo della Ragione, seat of the civil authorities in the Piazza dei Signori. It is Palladio who, as a tribute to classical architecture, names it "Basilica". During the same period he designs important palazzi for the noblemen of the town.

1550
At 42 Palladio designs the Palazzo Chiericati, one of his most important architectural artworks in the Vicenza area. His ideas for this great private residence are a transition into full maturity of expression of the architect. During the same year he designs the Villa Chiericati in Vancimuglio, where he implements the façade of the ancient temples for the first time.

1552
Palladio designs the Villa Cornaro in Piombino Dese and the Villa Pisani in Montagnana, which are commissioned by important Venetian families. The architect's career enters a period with more opportunities, which lead him to different places within the mainland dominions of the Serenissima and into the lagoon town itself.

1554
Palladio has one of his most important villas built, the Villa Barbaro in Maser, not far from Asolo, which will be frescoed by Paolo Veronese in 1960-61. Its construction marks the goal of an important formal evolution, with the residence and its outbuildings aligned in a unique, spectacular complex.

1556
It is the year of the "Rotonda", also known as Villa Capra, the most famous among the Palladian villas, symbol of his idea of architecture. It is not by chance that the artist puts this temple-villa on an isolated hill, with a background scenery that sums up all the elements of the Veneto countryside. During the same year the architect is among the founders of the Accademia Olimpica of Vicenza, which unites the cream of the town's culture, to promote arts and science.

1559-65
Palladio designs the famous Villa Foscari, also called "Malcontenta", along the banks of the river Brenta, commissioned by one of the most powerful Venetian families. Over the following years, once more in Venice, he gets a number of important jobs, of which the most outstanding is the church of San Giorgio Maggiore with the annexed cloister, the Chiostro dei Cipressi.

1565
Twenty years after designing the Basilica, Palladio turns his attention on the Piazza dei Signori in Vicenza again: he works on the building opposite the square, the Loggia del Capitanio; however, it will remain unfinished. This case is quite unique for an architect of his rank, because within the same scenario we find two works, next to each other, one from the years of his beginnings and one from his mature age.

1569
Palladio designs a unique work of art, the bridge in Bassano del Grappa, in which the functionality of the wooden structure, the aptest to resist the furies of the floods, meets the beauty of great visual impact.

1570
Palladio replaces Jacopo Sansovino as architect counsellor of the Venetian Republic. After being consecrated to the highest artistic levels, he publishes The Four Books of Architecture, in which he leaves his teachings to posterity.

1580
It is the year of the Teatro Olimpico in Vicenza, one of his most suggestive works, clearly inspired by classical art. Its construction will be completed by Palladio's son Silla and by Vincenzo Scamozzi, his spiritual heir. At the age of 72, in fact, Palladio dies in Maser, during an inspection on the building site of the Tempietto, the chapel, of the Villa Barbaro.