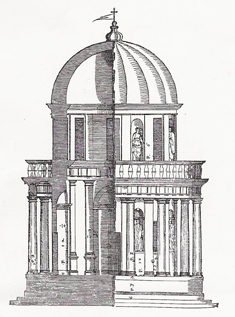 Palladio's works boast more then one record, starting with the conception of the villa in its highest architectural expression. Beyond the credits for the single art works, however, there is a constant factor that characterizes his whole curriculum: the surprising variety of clients.

This aspect concerns not only the importance of public bodies, from the town council of Vicenza to the Venetian Serenissima Republic, or the social status of private clients, among which there are noblemen and merchants, but also their political orientation. At the time, it oscillated between France and Spain on the international chess board and between Venice, Milan and the church on the national chess board (and let's not forget that on an urban level, this situation was even worse because also families had inevitably their scores to settle).

Still, Palladio worked without distinction both for ones and for the others and pleasing everyone in the name of an architecture which, because it was inspired by the ideals of classicism, aroused unreserved admiration. An architecture which looked more universal also in this respect.

This having been said, we also must acknowledge that Palladio's life was not a bed of roses. In Vicenza, for instance, he worked on commission for public works that changed the aspect of the town (just think of the Basilica on the Piazza dei Signori,)but in return he sadly had the pleasure of seeing only few of his palazzi being fully built, as these works were too ambitious for the urban families.

In Venice also a different odd phenomenon happened: Palladio's palazzi were not considered apt for the capital, maybe because they were too innovative, or more likely because they were labelled as provincial; so that's why only few Palladian churches are reflected in the Venetian lagoon.